Onion Bombs!, an explosion of bacon, beef and onion right in your mouth hole! 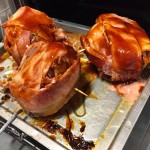